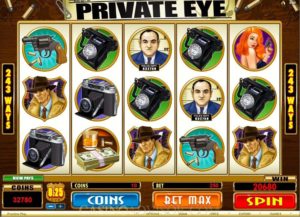 Here’s your opportunity to partner with Microgaming and become a first-class detective in their five reels and 243 ways to win online slot. An actual gambling crime gets committed, and players have to gather evidence and hunt down witnesses as they follow the scent of some lucrative Microgaming prizes in the Private Eye slot. The criminal is armed and dangerous; however, payments range from 1000 to 2500 coins. There are also Free Spins, 4xMultipliers and a Mugshot Bonus to keep you sleuthing at an RTP of 97.50%.

The Badge is the highest paying symbol and is the games Wild. It pays out a whopping 1000x your stake for five on a payline. The Detective acts as the games Scatter, followed by the Femme Fatale, Mugshot, Money, Car, Crime Scene Outline, Gun, Camera, Phone and Handcuffs.

There are 1x Wilds on all reels and 2 Bonus Features to be landed. The first Bonus is the pick me triggered by 3 Bonus symbols, the Newspaper Boy. This symbol must appear on the last three reels at the same time. Players get taken to another screen with a variety of newspapers from which they get to select three. Making the proper selections see you receive a maximum of up to 20 Free Spins with Multipliers reaching up to 4x your total stake. The Free Spins cannot retrigger.

When this PI gets down to business, he solves the case, and it’s no wonder he acts as the games Scatter symbol. Appearing at the crime scene, he will multiply your bet by 2, 10, or 100x your stake when you land 3, 4 or 5 Scatters, respectively.

Find the severe offender Dick Tracey style and get ready to evade the bullets and cash in one some decent rewards for taking another Dirty Rotten Scoundrel off the streets. 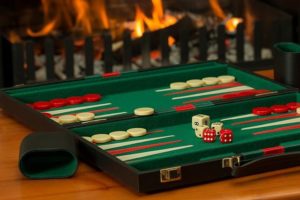 Punk Rocker xWays online slot is here, and it packs a punch with an arsenal of features packed into a noisy and upbeat environment driven by sheer adrenaline. Punk Rocker is by NoLimit City and offers players the ability to “buy” the feature and has 46656 ways to win. It’s a slot oh high volatility with a decent RTP of 96.11% with special symbols that multiply wins during the Free Spins and an xNudge Bonus, boosting punters winning potential up to 15072x your total stake from a single spin.

Punk Rocker has a good selection of symbols, and they include a Knuckle Duster, Bovver Boots, a Molotov Cocktail, Anarchist logo and a Mixer Switch. The lucrative characters are Sean Connery’s face, a Mona Lisa, Einstein, a Monkey and Winston Churchill, all with punky makeovers. Churchill is the best paying symbol and pays out as much as 5x your total stake for 6 in combination. The Wild is the Skull biting a Molotov Cocktail.

The design in Punk Rocker xWays is visually raucous, matching the gameplay, which is totally explosive in variety. The xWays symbols are central to Punk Rocker and hold between two and four matching characters, which then expand. The xWays Mystery Symbols features expansions increase the number of ways to win. The most explosive is the Punk Rocker characters as they expand up to 20 symbols high, and when fully expanded, the game engine then offers 46646 ways to win.

Land 2 Scatters on the same spin to trigger the Riot Respin Feature. A Respin gets awarded on reel 6, 729 ways to win machine with triggering Scatters changing into Sticky Wilds. Molotov Wilds visible on the triggering spin also turn Sticky.

Finally, there are the two Free Spin Features, both starting you off with 8 Free Spins and a superb selection of other boosting extras, and they are: 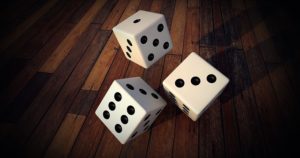 Online Craps is an exciting classic online casino game. Players place bets on the outcome of a roll or multiple rolls of a pair of dice. It’s one of the most interactive tables in a casino, and online and offline variations bring players hours of entertainment and money if lady luck is shining on you.

How to Play Craps

Craps is relatively easy once you get the gist of the online game. Like most online casino games, each stage has a fixed order, and there are three main rules to learn, and they are as follows:

Craps betting round starts with a come-out roll. The come-out roll is the first roll of the dice, and remember, the player who rolls the dice is called the shooter. Once the number rolled appears on the screen, there are three possible outcomes.

The sequence above has no number 7 because, in the game of Craps, it’s unlucky. If a player rolls a seven, they “seven out”, which means they lose, and the betting round ends.